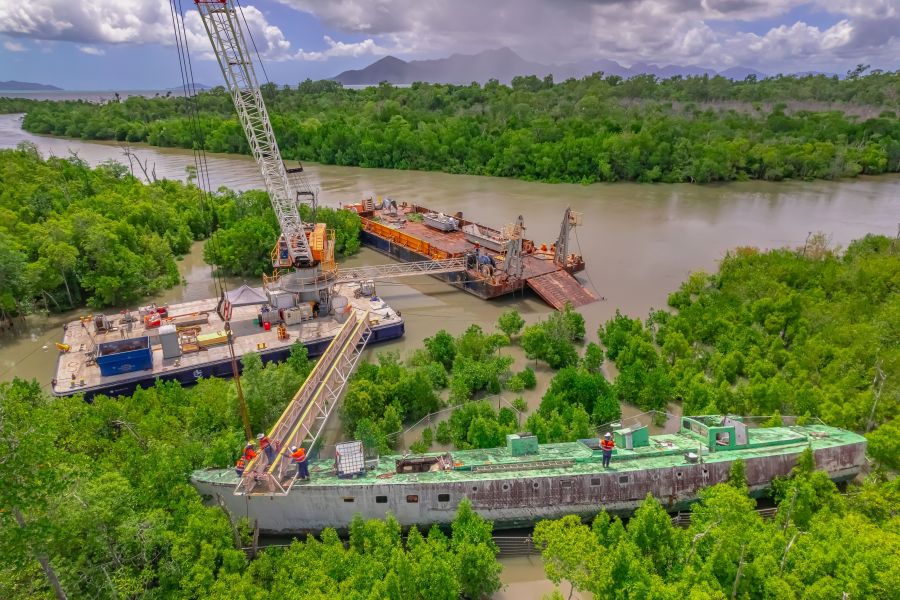 We were contracted to remove the derelict vessel “Commissioner” from Meunga Creek as part of the War on Wrecks funding provided by the QLD government.

The 34m timber vessel had been sitting surrounded by mangroves, since Cyclone Yasi, which came through the Cardwell area in 2011.

The Meunga Creek site is located within a national park which required works to be conducted in accordance with strict environmental approvals granted to MSQ by a range of government agencies and interested parties. In addition, the site is inhabited by saltwater crocodiles which dictated the need for a fence to be erected around the vessel to keep the crew safe while cutting the vessel into liftable segments.

PMG mobilised two barges and other small work boats from Townville to site to undertake the works. The 36m PMG123 was used as the cargo barge and the 70T pedestal crane on sheerlegs used to lift the cut sections (8-10Tonnes) out of the mangroves and onto the cargo barge for removal from site. Getting these 2 large barges across the shallow mouth of the creek, and into a narrow mangrove creek posed a number of challenges that were ultimately overcome with detailed planning and skilled mariners.

Cutting was undertaken using hand tools as heavy machinery was prevented from accessing the site due to the strict environmental approval conditions. Therefore, all cutting was restricted to pre-planned cut lines designed to ensure the cut sections were within the capacity of the crane and retain sufficient structural integrity during the lifting operations.

The vessel was successfully removed in only 5 sections (4 cut lines). The crew used a 22m long gangway between the crane barge and Commissioner to provide safe access which minimised the requirement to work down in the mud and minimise the impact on the local environment. In the end most cutting work was undertaken from inside the vessel, with the crew following the tide down to access the keel which was then plunge cut using a chainsaw.

Following the vessels removal, the site was cleaned of all residual debris before around 6m3 of sand was sourced locally and placed to fill along the keel line depression left in the mangrove mud in case the removal had exposed any acid sulphate soils.