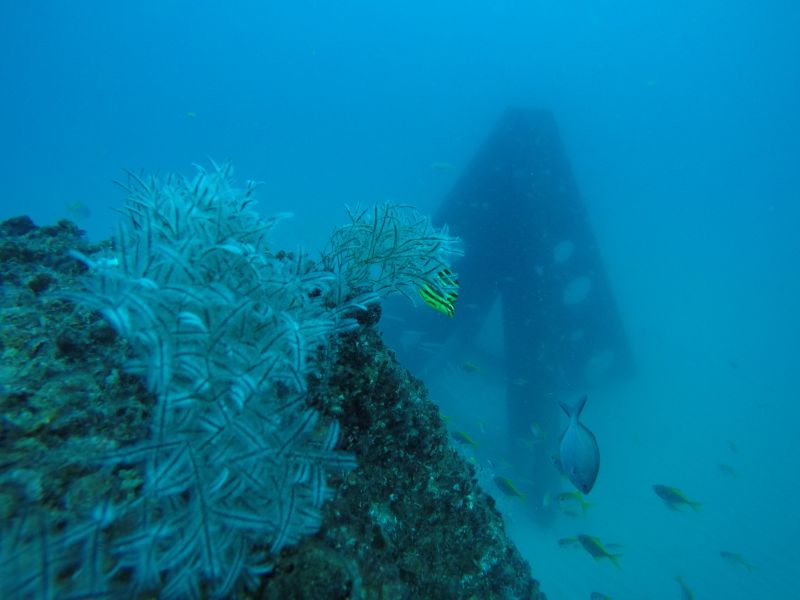 A follow up dive survey was conducted on the installed artificial reef structures with Manta Lodge & Scuba Centre, Point Lookout, North Stradbroke Island.  This 6 month survey focussed on cluster 1 and cluster 3 with cluster 4 having previously surveyed by MSQ using an ROV.  It is noted that the biodiversity is similar across all clusters with larger fish moving between the grouped modules, the variety of species is +20 at all locations.  The reef structures have 100% coverage with a myriad of hard corals, soft corals, alcynoacea’s, sponges, clams, barnacles and other crustaceans.  The coverage was reported to have been 100% as early as 2 months after installation, this increased rugosity has allowed smaller critters to take cover and increased food supply for smaller fish, this is noticeable with the increase in small fish numbers around all locations.  Eddies can be seen spinning around the edges of each module when the current is flowing through, with fish noticeably taking cover from the prevailing current on opposite faces.  There has been a serious shift of sand at some locations with scour around the bases, this scour making an excellent hideaway for various creatures.

Several sharks and marbled stingray were spotted on the fringes as well as a bottlenose dolphin that came along for a look after surfacing from the dive.  There were several good sized sweetlip, ideal for a keen spearo willing to brave the colder water in June.

All in all, a great showing for the cooler months, leopard sharks and manta ray numbers will increase when the water temperature picks back up later in the year and the nurseries continue to flourish.

The following creatures were spotted on the dive survey: