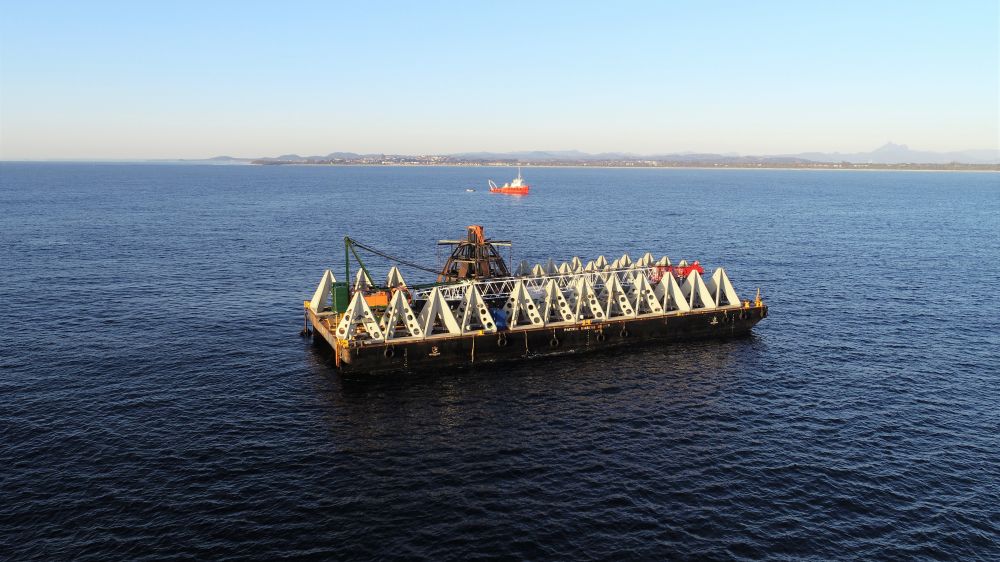 The project involved designing and constructing an artificial reef consisting of 32 of PMG’s in-house designed “Arrowhead” precast concrete reef modules which are 4m square, 5m tall and weigh around 17t. These modules were precisely placed on the seabed in 25m of water around the reef centrepiece, which is called the “Fish Grotto”. This steel structure stands 10m tall and weighs 90t after concrete ballast blocks are added, and was designed and built at PMG’s marine facility in Townsville, before being loaded onto our PMG183W barge with an onboard 180t crawler crane, along with all the arrowhead modules, and towed to site by our PMG Pride tug.

All concrete modules were precast in our Townsville yard by PMG staff, and the fish grotto was built by our fabrication team.

The arrowhead modules were modified from our standard design to incorporate various voids and textures to encourage a wide diversity of marine growth and fish habitat.

The aim of the reef, which was installed around 7.5km from the Tweed River entrance, is to attract recreational target fish species such as snapper, mulloway, kingfish, mackeral etc.

As always, the weather played a big part in the installation program due to the challenging offshore crane lifts. After a bit of waiting for the right conditions, the reef was successfully installed and the vessels and crew returned home ready for the next one.